Import 360° media into Final Cut Pro, edit your 360°project, then share your 360° video in monoscopic or stereoscopic format. While editing, monitor your 360° project on-screen, or with a VR headset.

In Final Cut Pro X 10.4, you can import and edit monoscopic or stereoscopic 360° video in a wide range of formats and frame sizes. While editing, you can output 360° video to a connected VR headset, and simultaneously monitor the equirectangular video and the 360° video in the Final Cut Pro 360° viewer. When you’re finished editing, you can easily export your 360° project and share them to a variety of video-sharing and social media websites, including the YouTube VR channel, Facebook 360, and Vimeo 360.

Get started with 360° video

You can record 360° footage with multiple cameras mounted in a special rig. You can also use a single 360° camera that has multiple lenses. The lenses record different, slightly overlapping camera angles. Before you import 360° footage into Final Cut Pro, you must create a single, seamless 360° image, referred to as a stitched image. Some 360° cameras do this automatically, so you can start editing right away. If you recorded the footage with multiple cameras, then you must stitch the footage together using third-party software.

For editing in Final Cut Pro, the stitched image must be an equirectangular projection. An equirectangular image looks like a world map that depicts the globe as a two-dimensional (2D) rectangle. 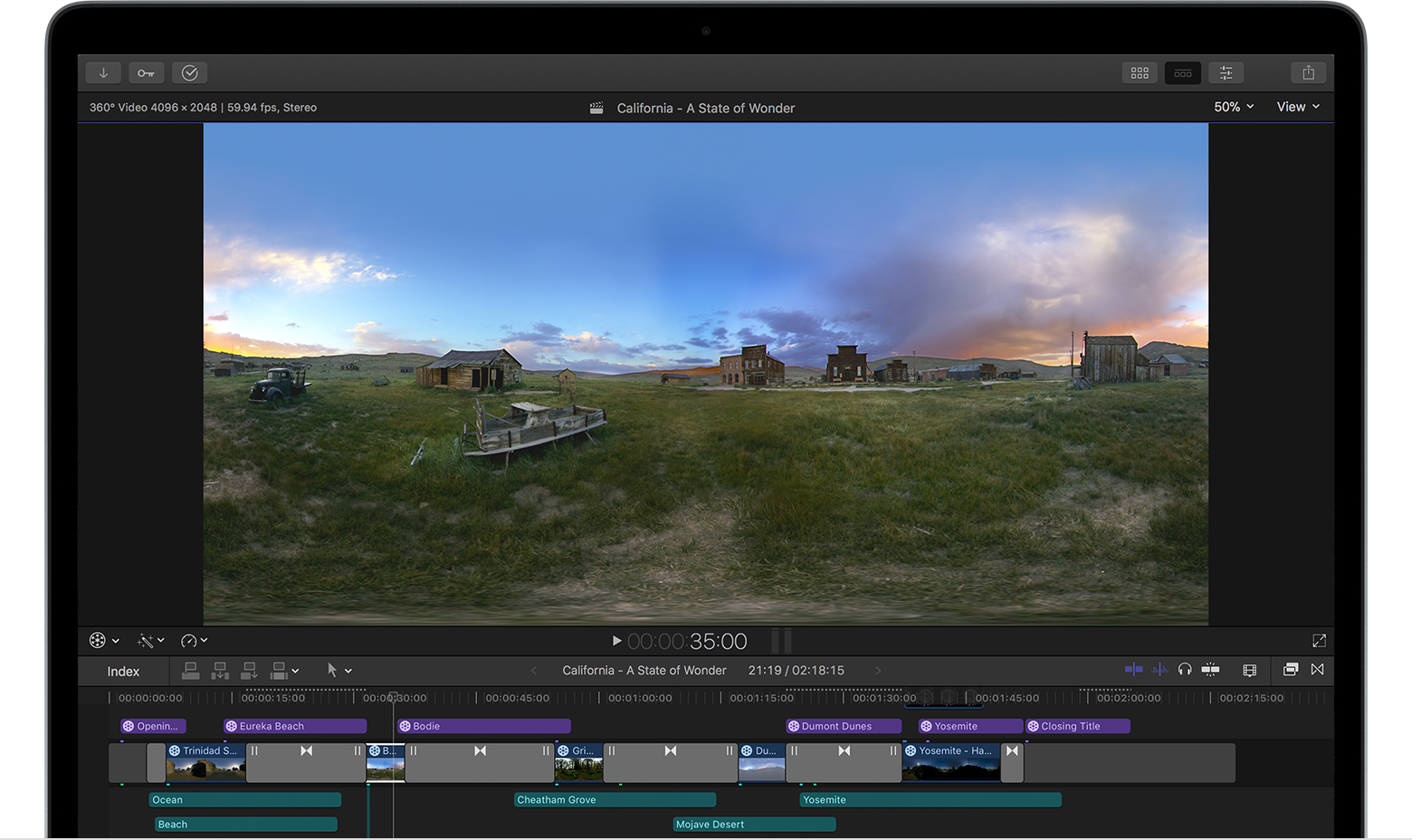 Before you import 360° video, make sure you’ve stitched all the camera angles together and formatted your 360° media for equirectangular projection. Choose File > Import > Media, select your clip, then click Import. The 360º clip appears in the viewer as an equirectangular view.

After you’ve imported the 360° media, it's a good idea to check your 360° media's metadata tags. These tags affect how the clips behave in Final Cut Pro's viewers, and how Final Cut Pro creates projects based on the clips you import. In most cases, your camera will automatically tag your media.

View and navigate the clips 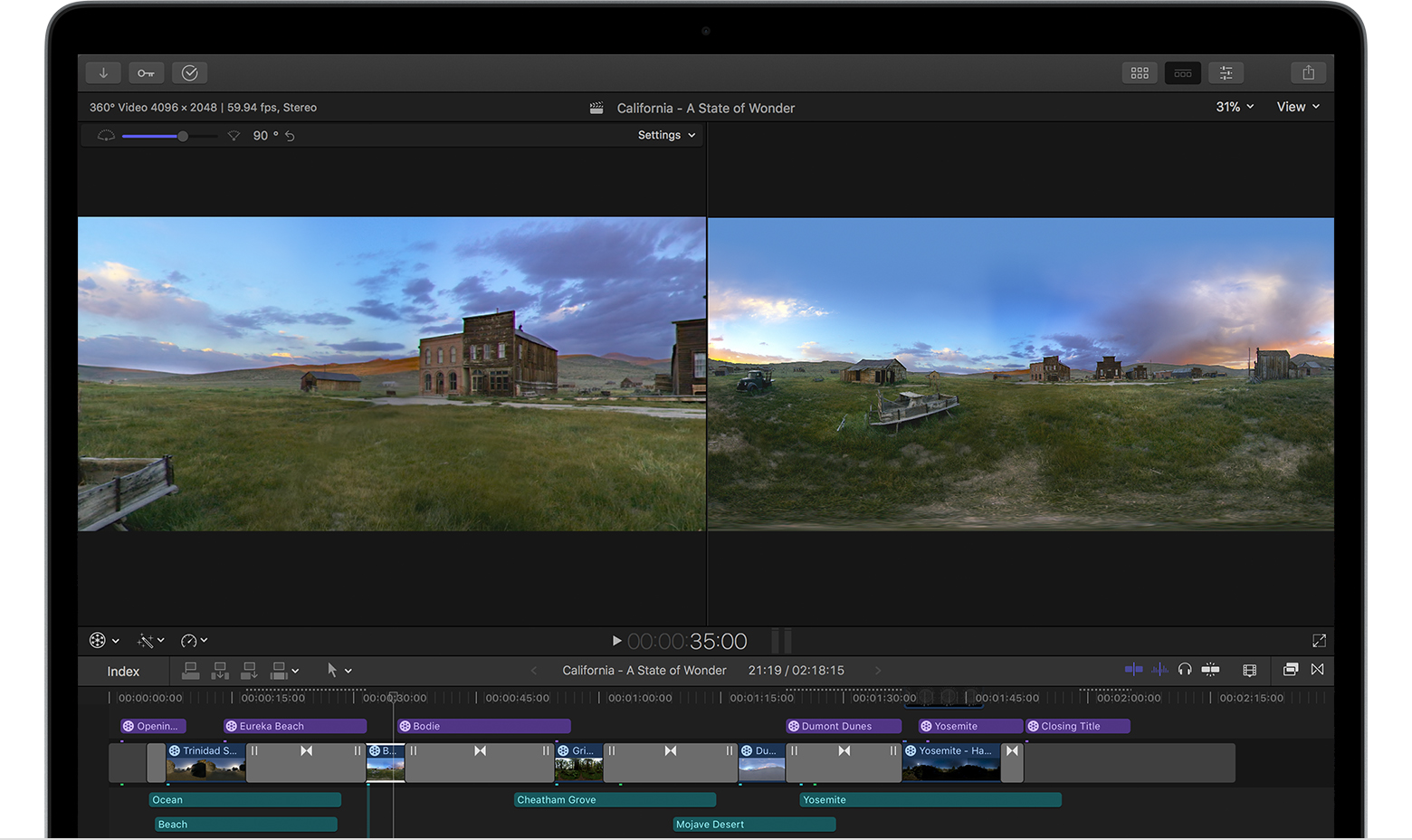 You can also use the following controls in the 360° viewer:

While editing, you can change the master orientation of a clip by adjusting its tilt, pan, and, roll. You can also cover up unwanted images like a camera mount by using the patch effect, and apply other special 360° effects, generators, and titles.

Change the master orientation of a clip

Every 360º video clip has a native master orientation—the initial angle that viewers see when they start watching the video. The master orientation is based on how it was initially recorded. To change this orientation, use the Video Inspector, onscreen controls in the viewer, or the Horizon guidelines.

Conceal unwanted objects in a clip

You can use the 360º Patch effect to conceal a tripod or other unwanted objects in the clip. You clone an area in the image, then place it over the object you want to hide.

Final Cut Pro includes special 360° versions of some standard effects, such as blur, glow, and sharpen effects. You can apply these effects to 360° clips and 360° projects without creating seams, unwanted distortions, or other artifacts.

When you’ve finished editing your 360° project, you can share it to a variety of video-sharing and social media websites that support 360º video, such as the YouTube VR channel, Facebook 360, and Vimeo 360. Final Cut Pro includes the appropriate 360° metadata in the output media file so that it will be recognized appropriately. You can also export a master file, or export XML files of events, projects, or libraries that include 360° clips and projects.