Power Mac G4: How to Differentiate Between Models

This information is available in: 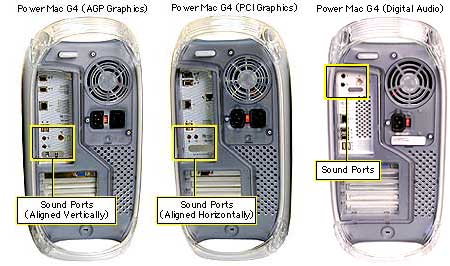 1. The Power Mac G4 (AGP Graphics) may contain a card with a VGA port only or both a VGA port and a DVI port.

3. L2 or L3 cache levels stated are per processor on dual processor configurations.

4. Wireless Internet access requires an AirPort Card, AirPort Base Station, and an Internet service provider, for which fees may apply. Some ISPs are not compatible with AirPort. For more information, see technical document 106590: "AirPort: Requirements for Wireless Internet Access."

5. Although 2 GB can be physically installed, a maximum of 1.5 GB is recognized by Mac OS 9. Mac OS X will see the entire 2 GB.