Learn about the external features, port, and connectors on your Mac Pro (Late 2013) computer.

All the ports and connectors shown here are located on the Input/Output (I/O) panel. 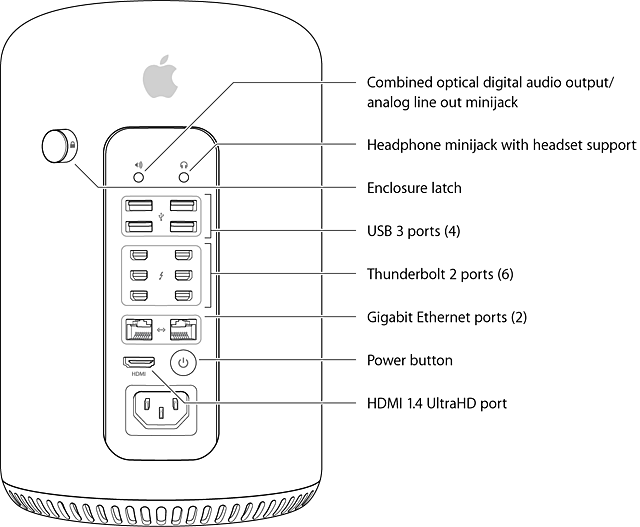 Audio line out (digital/analog) minijack
The audio line out port is a 1/8" minijack that supports stereo analog audio and digital S/PDIF fiber optic cables. You can find audio devices you connect to this port in System Preferences > Sound > Output. This port does not support headsets or microphones.

Headphone minijack
The headphone out port is a 1/8" minijack that supports headphones and headsets. When you plug in headphones to this port, sound is redirected from the internal speakers to the headphones. Headphones will appear in System Preferences > Sound > Output. If the headset has a microphone, it will appear in System Preferences > Sound > Input. iPhone headsets including mic and inline controls are supported. Digital output devices are not supported on this port.

Enclosure latch
This latches the enclosure to the system core. Keep the system latched during normal use. The enclosure must be on for you to be able to turn on the computer.

The USB ports use USB Type A connectors which have four pins each. USB 3 (also known as "SuperSpeed USB") can transfer data up to 5Gbps. USB 3 devices can use up to 900mA of power (compared to USB 2 device which can use up to 500mA). Use USB 3 cables to take advantage of this functionality. For complete information on using USB 3 devices, see Using USB 3 devices on Mac computers FAQ.