Learn about latency on a digital audio system and determining the optimal buffer size setting for your computer.

When you monitor audio in Logic and other audio software, it is necessary for the computer to buffer some of the incoming and outgoing data to protect against dropouts, clicks, or pops. The size needed for the buffer varies depending on factors including the speed of the processor, type of audio driver, sample rate, and more. In general, the more powerful the computer, the smaller the buffer can be without undesirable audio artifacts. The I/O buffer size affects the amount of "input monitoring latency" for the computer. Input monitoring latency is the slight delay you hear when you feed audio into your interface or when you playback software instruments. The smaller the I/O buffer size, the less delay you will hear.

Here are settings that may directly affect the amount of latency you will hear when monitoring audio through Logic:

The quotient of the buffer size and sample rate are multiplied by two to account for both the input and output buffers.

Lower buffer sizes and higher sample rates may result in less monitoring latency, but these settings require more computational power. If you set the I/O buffer size to a value too low for your computer to handle smoothly, you may hear dropouts, clicks, pops or other artifacts in the audio. In some cases, these may be saved to your recorded tracks and may be a challenge to remove later. Likewise, higher sample rates require proportionally more computational power, so higher sample rates also require higher I/O buffer size settings for good performance on a computer. The type of audio interface you are using also may affect the optimal buffer size setting. It's not recommended to use a setting lower than 128 with Firewire interfaces. It may be possible to set the I/O buffer size as low as 64 on PCI/PCIe based systems.

In Logic 8 and 9 you can fine-tune the monitoring latency with another setting:  I/O Safety Buffer.  When you select this option, an additional buffer is added to the I/O buffer size.  Simply put, with this buffer you can select "in-between" settings.  In most cases, you can leave this option unselected. 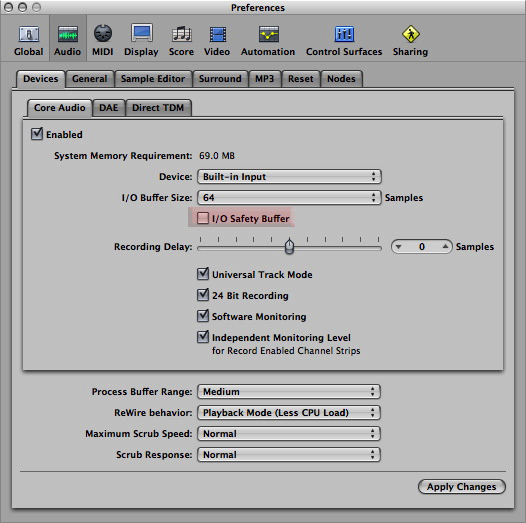 The roundtrip latency when playing software instruments live through Logic will typically be less than when monitoring audio. It is the sum of: