How to uninstall iOS beta software

Members of the Apple Beta Software Program, Customer Seed Program, and Apple Developer Program can try iOS beta releases. This article explains how to go back to the latest publicly-released version of iOS if you installed a version of iOS beta and no longer want it.

Learn more about the Apple Beta Software Program or the Apple Developer Program.

Update when new
iOS is available

Remove the public beta by deleting the beta profile

If you used a computer to install an iOS beta, you need to restore iOS to remove the beta version.

The easiest way to remove the public beta is to delete the beta profile, then wait for the next software update. Here's what to do:

When the next public version of iOS is available, install it to move back to a non-beta version of iOS. If an update is already available, you can install it by going to Settings > General > Software Update, but the iOS version must be later than the version you have.

If you don't want to wait for a software update to install a non-beta version of iOS, follow the steps to restore iOS.

Remove the developer beta by restoring your device

To remove the developer beta immediately, you need to erase and restore your device. Then—if you have an archived backup—you can set up your device again from that backup.

Note that backups created while using beta software might not be compatible with older versions of iOS. If you don't have an older backup that was made using the current version of iOS, you might not be able to restore your device with your most recent backup.

After the restore finishes, you can set up your device from your archived backup, which must be from an earlier version of iOS.

If you back up a device that has iOS beta to iCloud or your computer, the backup won’t work with earlier versions of iOS. For example, if you go back to iOS 11.4.1 from iOS 12 beta, a backup you made while using iOS beta won’t restore. Instead, restore from a backup that you made before you installed iOS beta. 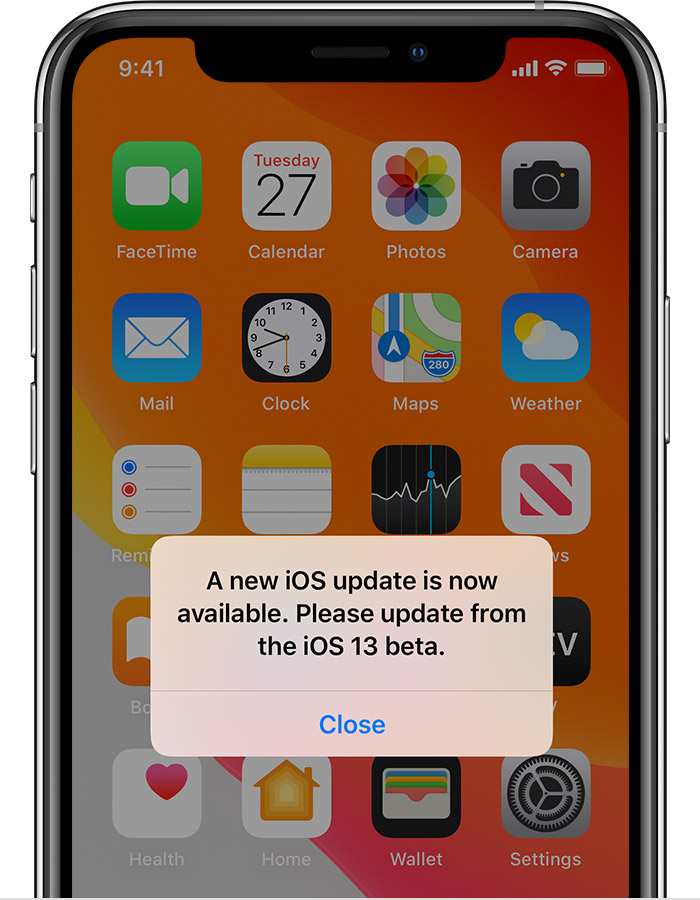 If you see this alert, it means that the version of iOS beta on your device expired and you need to update. Tap Settings > General > Software Update and install the update.