Your iPhone is designed to deliver an experience that is simple and easy to use. This is only possible through a combination of advanced technologies and sophisticated engineering. One important technology area is battery and performance. Batteries are a complex technology, and a number of variables contribute to battery performance and related iPhone performance. All rechargeable batteries are consumables and have a limited lifespan — eventually their capacity and performance decline such that they need to be replaced. As batteries age, this can contribute to changes in iPhone performance. We created this information for those who would like to learn more.

“Battery life” is the amount of time a device runs for before it needs to be recharged. “Battery lifespan” is the amount of time a battery lasts until it needs to be replaced. One factor affecting battery life and lifespan is the mix of things you do with your device. No matter how you use your device, there are ways to help. A battery’s lifespan is related to its “chemical age”, which is more than just the passage of time. It includes different factors, such as the number of charge cycles and how it was cared for. Follow these tips to maximise battery performance and help extend battery lifespan. For example, keep iPhone half-charged when it’s stored for the long term. Also avoid charging or leaving iPhone in hot environments, including direct sun exposure, for extended periods of time.

As lithium-ion batteries chemically age, the amount of charge they can hold diminishes, resulting in shorter amounts of time before a device needs to be recharged. This can be referred to as the battery’s maximum capacity — the measure of battery capacity relative to when it was new. In addition, a battery’s ability to deliver maximum instantaneous performance, or “peak power”, may decrease. In order for a phone to function correctly, the electronics must be able to draw upon instantaneous power from the battery. One attribute that affects this instantaneous power delivery is the battery’s impedance. A battery with a high impedance may be unable to provide sufficient power to the system that needs it. A battery's impedance can increase if a battery has a higher chemical age. A battery’s impedance will temporarily increase at a low state of charge and in a cold temperature environment. When coupled with a higher chemical age, the impedance increase will be more significant. These are characteristics of battery chemistry that are common to all lithium-ion batteries in the industry.

When power is pulled from a battery with a higher level of impedance, the battery’s voltage will drop to a greater degree. Electronic components require a minimum voltage to properly operate. This includes the device’s internal storage, power circuits and the battery itself. The power management system determines the capability of the battery to supply this power, and manages the loads in order to maintain operations. When the operations can no longer be supported with the full capabilities of the power management system, the system will perform a shutdown to preserve these electronic components. While this shutdown is intentional from the device perspective, it may be unexpected for the user.

With a low battery state of charge, a higher chemical age or colder temperatures, users are more likely to experience unexpected shutdowns. In extreme cases, shutdowns can occur more frequently, thereby rendering the device unreliable or unusable. For iPhone 6, iPhone 6 Plus, iPhone 6s, iPhone 6s Plus, iPhone SE (1st generation), iPhone 7 and iPhone 7 Plus, iOS dynamically manages performance peaks to prevent the device from unexpectedly shutting down so that the iPhone can still be used. This performance management feature is specific to iPhone and does not apply to any other Apple products. Starting with iOS 12.1, iPhone 8, iPhone 8 Plus and iPhone X include this feature; iPhone XS, iPhone XS Max and iPhone XR include this feature starting with iOS 13.1. Find out about performance management on iPhone 11 and later. The effects of performance management on these newer models may be less noticeable due to their more advanced hardware and software design.

This performance management works by looking at a combination of the device's temperature, battery state of charge and battery impedance. Only if these variables require it, iOS will dynamically manage the maximum performance of some system components, such as the CPU and GPU, in order to prevent unexpected shutdowns. As a result, the device workloads will self-balance, allowing a smoother distribution of system tasks, rather than larger, quick spikes of performance all at once. In some cases, a user may not notice any differences in daily device performance. The level of perceived change depends on how much performance management is required for a particular device.

Many key areas are not affected by this performance management feature. Some of these include:

For a low battery state of charge and colder temperatures, performance management changes are temporary. If a device battery has chemically aged far enough, performance management changes may be more lasting. This is because all rechargeable batteries are consumables and have a limited lifespan, eventually needing to be replaced. If you are affected by this and would like to improve your device performance, replacing your device battery can help.

Additionally, you can see if the performance management feature, which dynamically manages maximum performance to prevent unexpected shutdowns, is on, and you can choose to turn it off. This feature is only enabled after an unexpected shutdown first occurs on a device with a battery that has diminished ability to deliver maximum instantaneous power. This feature applies to iPhone 6, iPhone 6 Plus, iPhone 6s, iPhone 6s Plus, iPhone SE (1st generation), iPhone 7 and iPhone 7 Plus. Starting with iOS 12.1, iPhone 8, iPhone 8 Plus and iPhone X include this feature; iPhone XS, iPhone XS Max and iPhone XR include this feature starting with iOS 13.1. Learn about performance management on iPhone 11 and later. The effects of performance management on these newer models may be less noticeable due to their more advanced hardware and software design.

Devices updating from iOS 11.2.6 or earlier will initially have performance management disabled; it will be re-enabled if the device subsequently experiences an unexpected shutdown. 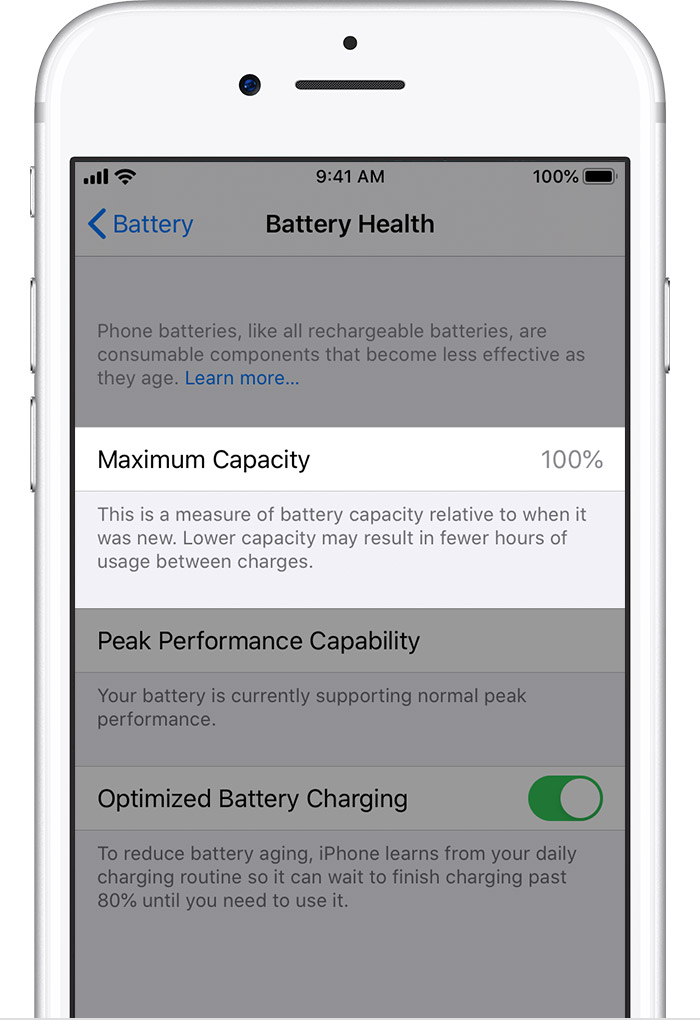 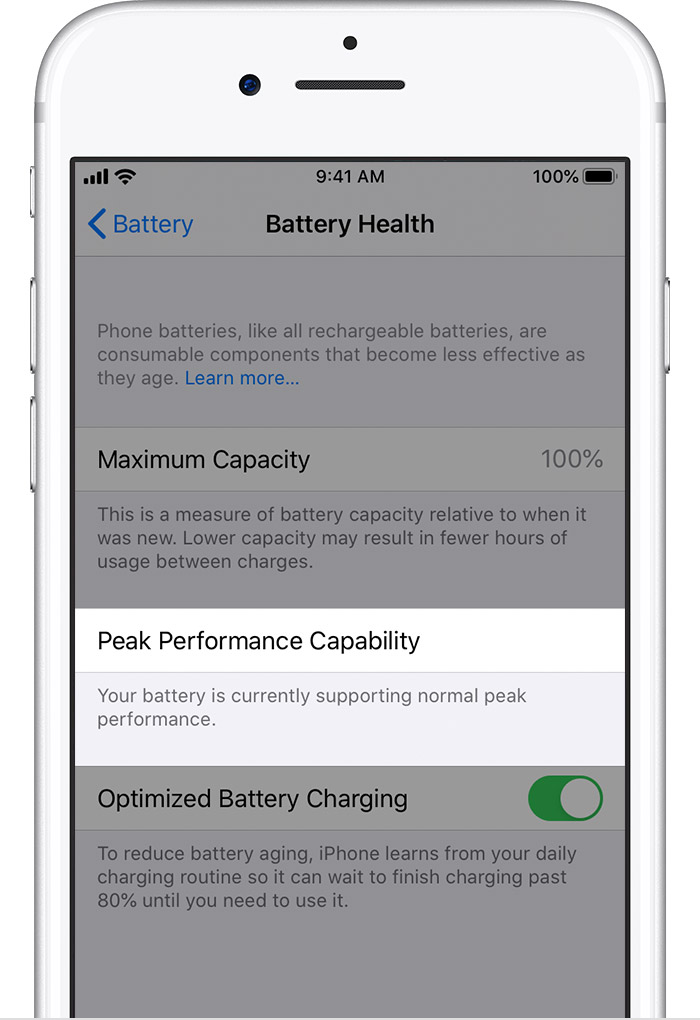 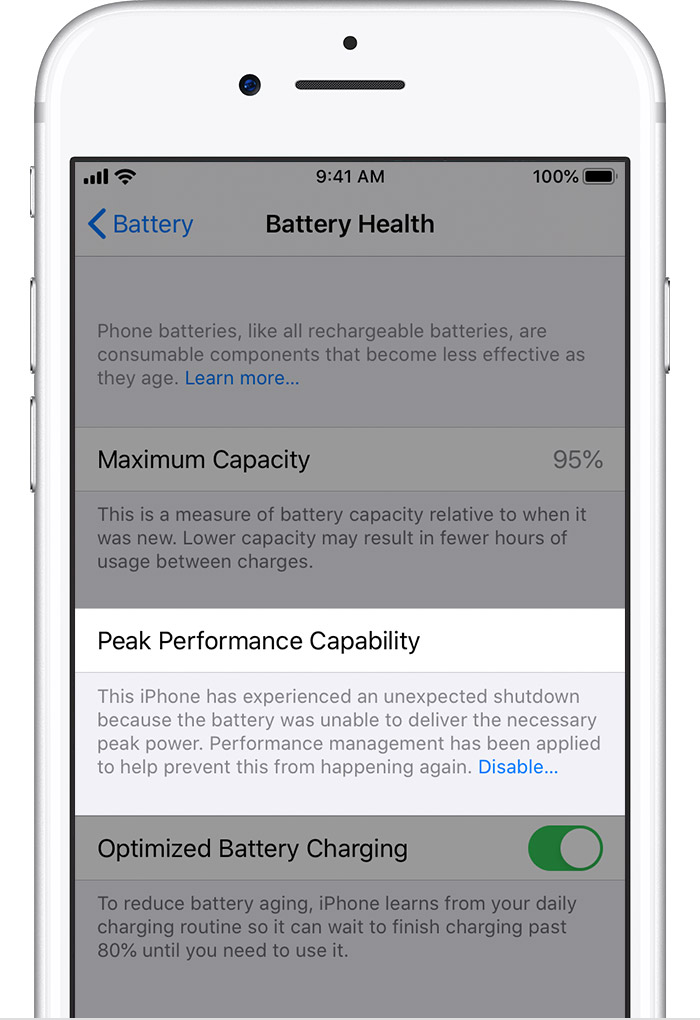 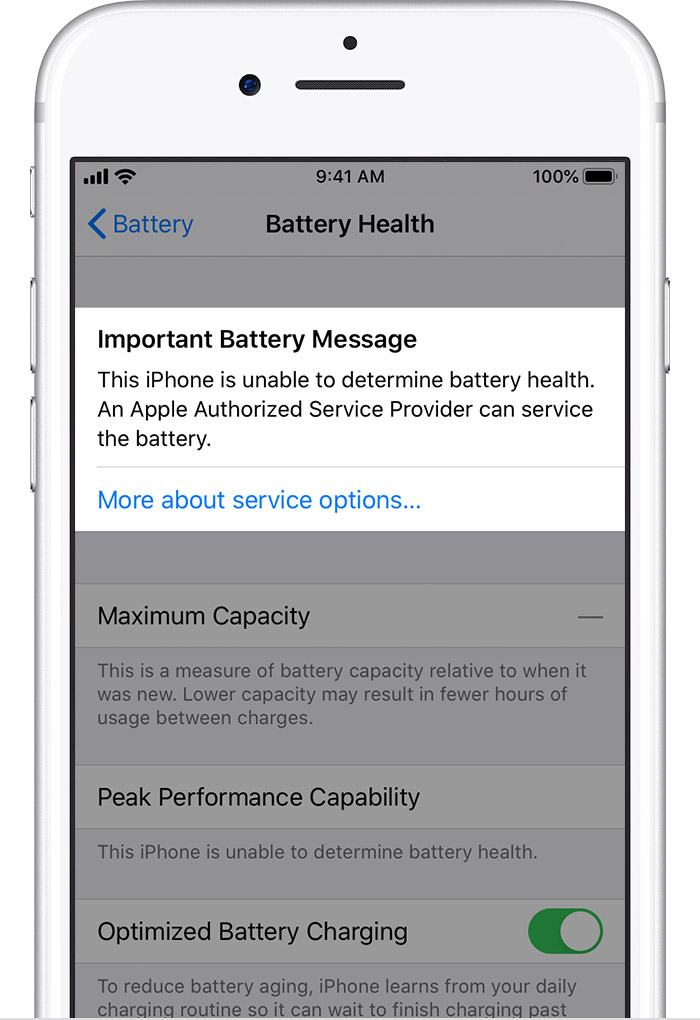 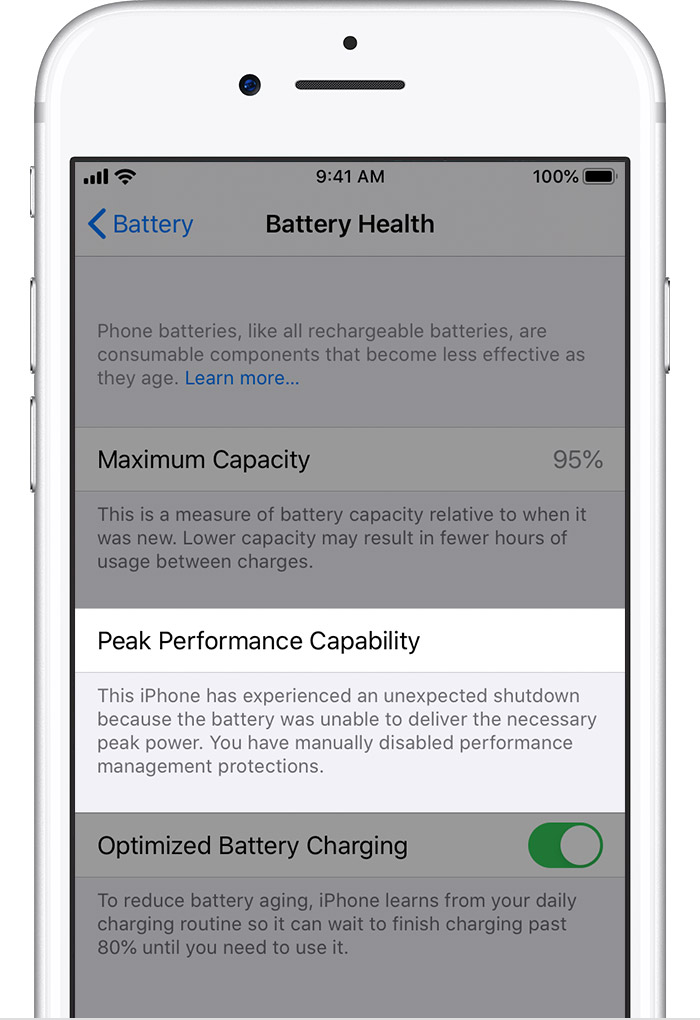 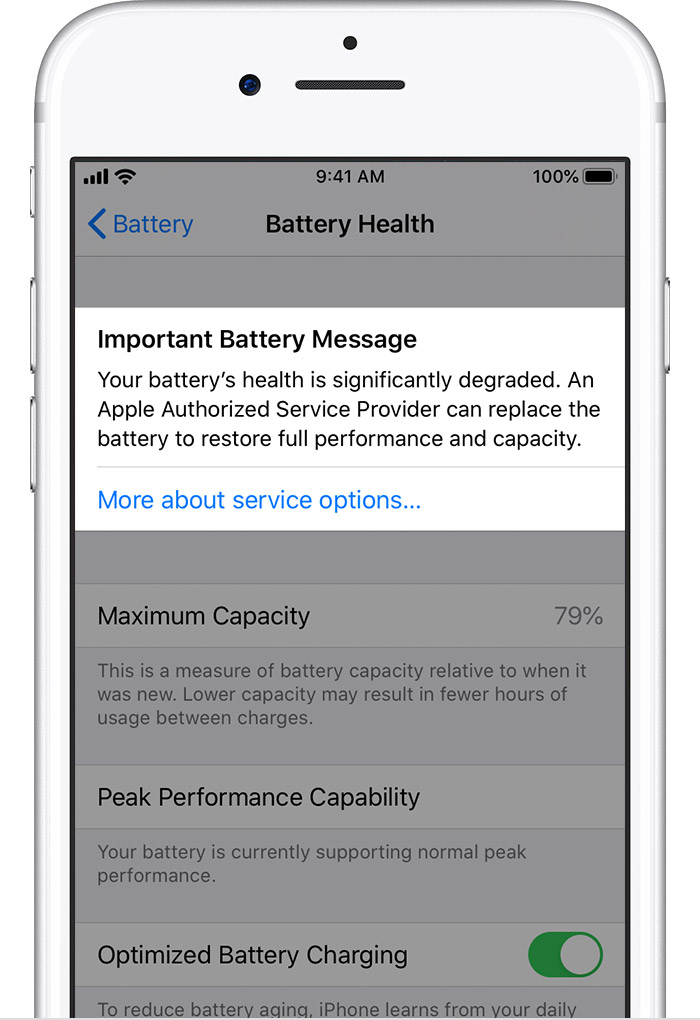 Your battery’s health is significantly degraded. An Apple Authorised Service Provider can replace the battery to restore full performance and capacity. More about service options… 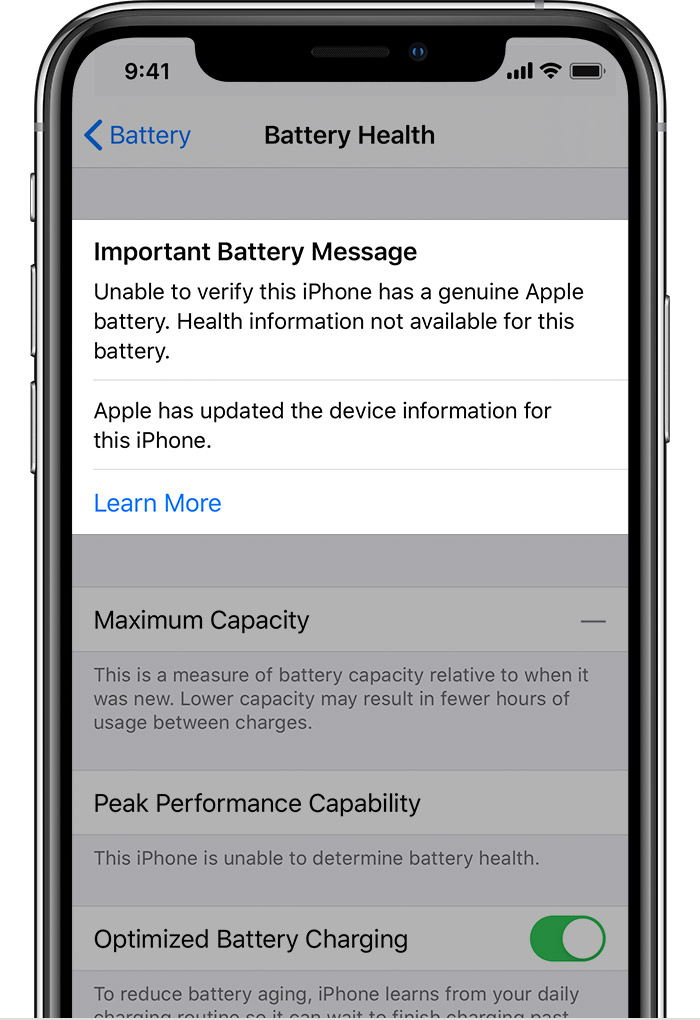 If you see the below message, it means the battery in your iPhone is unable to be verified. This message applies to iPhone XS, iPhone XS Max, iPhone XR and later.

Reported battery health information is not available. To have your battery checked, contact an Apple Authorised Service Provider. More about service options.

Find out more about this message as it appears on iPhone 11 and iPhone 11 Pro and later.

If your device performance has been affected by an aged battery and you would like to get help with a battery replacement, contact Apple Support for service options.

Find out more about battery service and recycling.